Blackthorn, dark sister of the May. 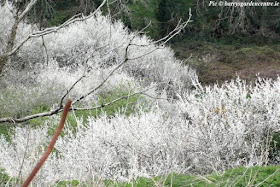 Blackthorn, Draighean, a prelude to the May,
has recently started to blaze a trail, like pale spirits across the land.

Unlike the whitethorn, blackthorn blossom appears before the leaves unfurl, giving a contrast of white flowers against dark, thorny branches and although both trees in folklore are associated with fairy belief, tales told of the blackthorn are darker. 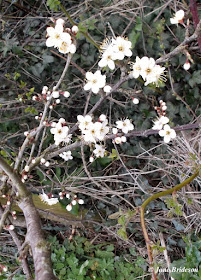 White blossoms are appearing to signal the ebbing of the winter weather. 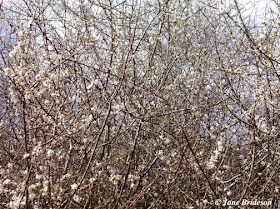 Blackthorn is understood to be protected by the Good People and only the fool hardy would consider cutting or burning these thorns. 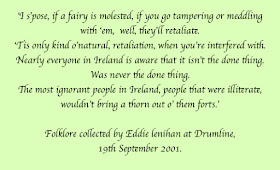 In other places, whether a lone bush or a stand of trees, the thorn should not be cut on May 11th,
the old date for Bealtaine, or on November 11th, the original Samhain.
Those who ignore this advice do so at their peril as it is known They have their own ways of exacting the price to be paid. 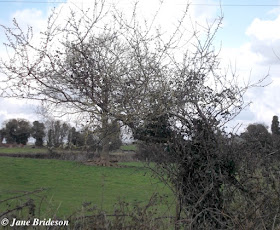 Where blackthorn grows near whitethorn, the site is considered especially magical.
This is Dempsey’s Ring. Co. Offaly, photo taken in summer
showing some remaining whitethorn blossom.
Here both blackthorn & whitethorn trees protect the remains of a fairy fort.

Just as the devil is said to spit on blackberries at the start of winter, so the Good People blight the sloes of the blackthorn at Samhain.
In Galway it was customary to drink sloe wine on Hallow’een, whilst in Co. Roscommon the last sloe was baked into the Barn brac, the Hallow’een cake, and whoever received the fruit in their slice was the person who would live the longest. 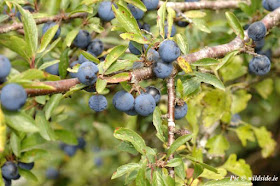 Sloes, the fruit of the blackthorn, are still used to make sloe gin.


The tree itself is said to be protected by the ferocious Lunantishee, beings believed to live within
the bush itself.
Some associate the blackthorn with the Leannán Sidhe, the Fairy Lover, who seeks the love of a mortal but whose love is both beautiful and terrible.
Once captivated the human is blessed with poetic inspiration but will finally waste away of longing for her. 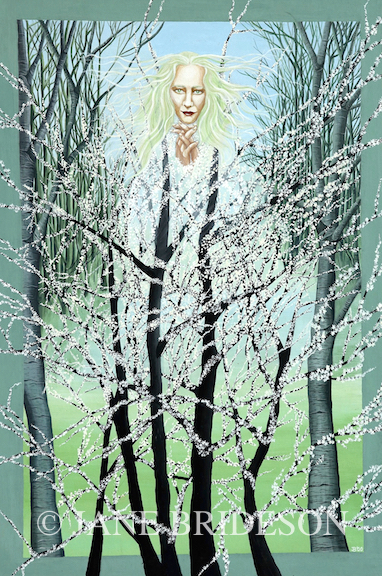 ‘The Spirit of Blackthorn’ painted after many visits to a wild place where
thorn trees grew unmolested.


The fierce nature of the thorn is also reflected in Irish mythology when it was used by warriors who fought with clubs of spiked blackthorn ringed with iron.
The shillelagh or Irish fighting stick was also made from blackthorn because of its’ hardness and the wood was cured to further strengthen it by burying it in a dung heap or smearing it with butter then placing it up the chimney. 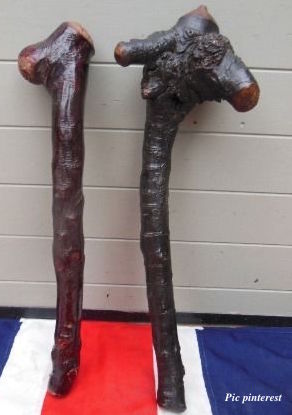 Antique shillelagh.
It is said that the first blackthorn fighting stick was made in the village of Shillelagh, Co. Wicklow and they were developed by the Siol Ealaigh people of the area over 1,200 years ago.

In many areas a thorn walking stick was understood to be a charm against danger and evil spirits
and when carried at night, it protected against ill-wishers and the attentions of the Good People. 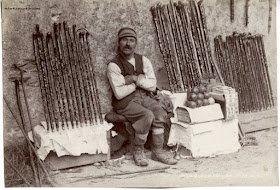 Image from pinterest.com
'Paddy the sticks', who made and sold blackthorn walking sticks
was once a well known figure in Killarney.

.
The abiding belief in the Good People here has meant that in many places fear of retribution has guarded the blackthorn and hidden many sacred sites from destruction. 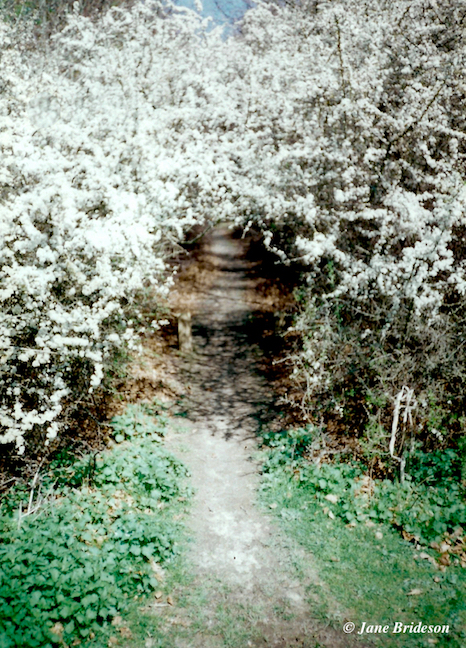 In untamed places, where the blossom grows thickest,
beware the paths which wind through her spiny tunnels, for eventually
they will lead you to the waiting Lunantishee and on into the Otherworld.
Jane Brideson at 19:39:00
Share