Travelling to the Otherworld

Yesterday we visited Colm and his family to deliver the painting and our journey took us through Autumn countryside, past harvested fields watched over by crows, through a landscape of valleys
and blue green mountains.

Listening to Colm's music I am often transported away from my mundane world to to a timeless place alive with ancient magic and it was this journey that I hoped to capture in my painting, along with the rich Irish musical tradition relating to the Otherworld.
The oral folklore of Ireland contains many tales of musical gifts and tunes given to mortal fiddle players by the Sí, the fairy folk.
Examples include Michael and Jim Coleman of Sligo, John Mhóisaí Mac Fhionnlaoich,
Junior Crehan of Clare and Néillidh Boyle who was 'taken' and learned to play fairy music through
his contact with the Otherworld.

Occasionally the instrument itself is enchanted and elsewhere songs convey hidden lore relating to the good folk.
This contact between people and the Sí often occurs at special places such as a Fairy Fort, a mound which contains an entrance to the Otherworld,

or near a Lone Bush, usually a whitethorn, which is understood to be a meeting place for the Sí.


Supernatural animals also abound in folklore especially the hare which was thought to travel between the worlds and was believed to be the Cailleach herself in animal form.
Appropriately for this time of year there are many harvest customs which relate to the Irish hare
and in the north of the island the last sheaf  to be cut was often named the "hare".


And as Colm explains on his CD:

"The phrase "The Hare's Corner" comes from the ancient Irish Custom of at harvest time leaving a corner of a field uncut as a refuge for the Hare to escape to.
...
I first heard my father Liam, mention the phrase in a conversation we had about the famous writer
and Irish language activist Máirtín Ó Cadhain (O'Kyne).
Ó Cadhain identified the 'Gaeltachtaí' or 'Irish speaking regions' as being like the Hare's Corner of
the Island of Ireland- that had but a temporary reprieve from the reaper's blade.
I was captivated by the metaphor of the "Hare's Corner"...
It represents for me the wild and mysterious source of the many rivers of music and imagination.
The music here on this record are the strange gifts I returned with from my many walks in the long grass!" 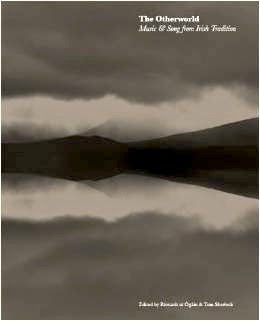 "The Otherworld - Music & Song from Irish Tradition." Edited by Ríonach uí Ógáin and
Tom Sherlock found here and or here

Another piece of Colm's magic from The Hare's Corner