Time of The Cailleach

When daylight decreases and the cold wind nips at my nose as I walk along the frosty road I know
that it is the time of The Cailleach.
Cailleach means 'old woman, hag or veiled one' and she also known in Ireland as
Cailleach Bhéara,  Cailleach Bhiorach, Cailleach na Huibhe, Boí / Buí & Sentainne Bérri.
She has many different guises in folklore: she is the bean ghlúine - the midwife, the bean fasa -
the wise woman and the bean chaoínte - the keening woman.
She is also the hag who is embraced by the hero to become the beautiful Goddess of Sovereignty.
The Old Woman may originally have been a lunar goddess associated with the sea, the formation
of the land and various horned animals especially deer and cows. 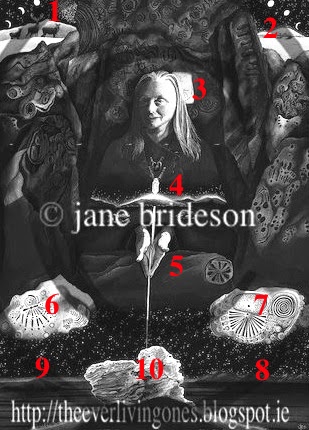 1 On the left, beneath the waxing moons and the Bealach na Bó Finne, the Milky Way
can be seen Slieve Gullion, Co. Armagh where the southern cairn, the largest, is known as
the Calliagh Berra's House and to its north lies the Calliagh Berra's Lough.
She is said to have tricked Fionn McCool into jumping into its waters and when he emerged he
was transformed into an old man.
Beneath the mountain is a small herd of red deer, the only species native to Ireland, believed to have had a continuous presence here since the end of the last Ice Age, c. 10,000 BCE.

2 On the right, beneath the waning moons, lies Cnóbha, Knowth, Co. Meath.
The mound is also known as Cnoc Buí where it is believed that the ancestor, Buí,
'cow like one' is buried. 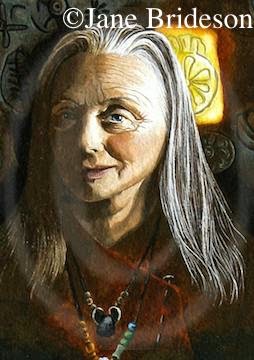 3 An Cailleach sits at the centre of the painting within the west recess of Cairn T,
Sliabh na Caillí, part of the Loghcrew passage tomb complex in Co. Meath which dates
from around 4,000 BCE .

She is surrounded by the many, richly decorated stones which line the tomb and around her neck
hang some of the objects discovered in excavations of the complex.
Above her is a carved stone set into the roof and beneath it the 'Equinox' stone of the recess which is illuminated by the rising sun at the Autumn and Spring Equinoxes. 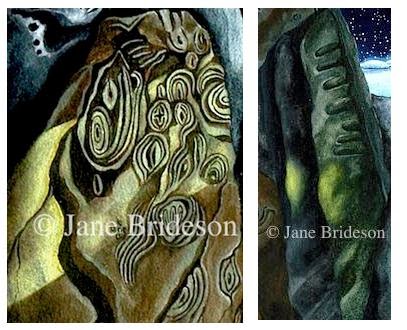 4 The complete complex of Loughcrew spreads across the lap of An Cailleach.
Patrickstown Hill is on the left, Carnbane East with Cairns T, U and V visible at the centre and Carnbane West on the right, showing Cairns D and L. Altogether there are the remains of 25 cairns here, each aligned to various astronomical events, with Cairn T on the highest peak commanding views over 18 counties.

5 Her hands are placed in the crack of the sill stone as she connects the earth, the sea and the moon.

6 To the left is the pale Calendar Stone found at Cairn X on Patrickstown Hill, thought to show
both solar and lunar cycles.
On the right is kerbstone 15 from Knowth also thought to be a Calendar Stone depicting the
suns' annual journey. 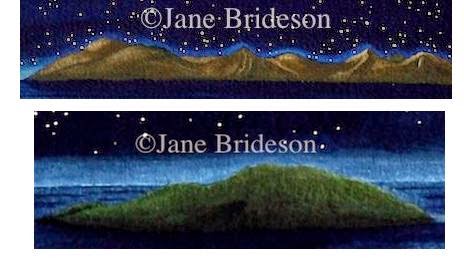 7 Below this is Carrauntoohil, Co. Kerry with the Hag's Tooth just visible.
To the left is Oiléan Buí, Dursey Island off the Bheara Peninsula, Co. Cork.
Close to the coast of the island is a rock standing in the sea known as Bó Buí, Buí's Cow,
which is said to have been turned to stone by An Cailleach herself.

8 At the centre bottom is An Cailleach Bhéarra, The Hag of Beara, a metamorphic rock

unlike any other in the area.

There are many stories about The Hag of Beara locally, one being that she turned herself to stone
so that there would always be a hag on Beara.
Another tells that she stands on the hillside above Coulagh Bay gazing out over the Atlantic
watching for the return of her lover Manannán Mac Lír.
If you visit her today you will find offerings of ribbons, flowers and crystals adorning the rock
in honour of the Cailleach Bhéarra. 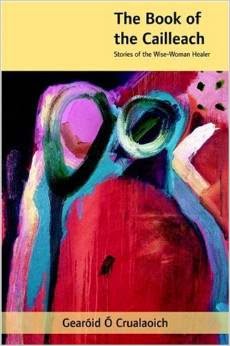