Wrapped up warmly and wearing wellies I ventured into the Lough Field today to cut the reeds to
make Brighid's Crosses for our home and for friends. 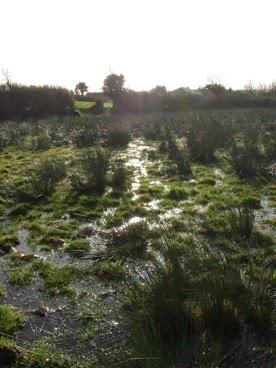 As I mentioned in a previous post, the Lough Field was once a lake containing a tiny island on
which grew a fairy thorn. When the course of the River Barrow was changed the lake dried up
but local belief held that the thorn and the field was still the gathering place of the Sídhe.

Several stories about the field and the lough were told to me by an elderly man who had lived
here all his life and although Jim considered himself to be good Catholic, attending mass every
week and saying the rosary regularly, he confessed that he had a strong belief in the 'good folk'
and the Old Ones who are still about.
At one time, before electricity came to this part of the island and people still rambled to each
others' homes of an evening to tell stories, it was understood that the fairies lived in the Lough
itself, so today I made sure to ask their permission before I began to cut.

This year I was alone but in previous years several of my women friends have gathered
by the fire here to make crosses, drink tea and eat home made scones.


We make several different forms of crosses each once special to Brighid in different counties.
The well known four-armed cross,


My own favourite the three-armed cross,


And the more complicated woven cross which needs two pairs of hands.

Once completed the cross is hung above the hearth or the front door as protection against
famine, fire and disease. 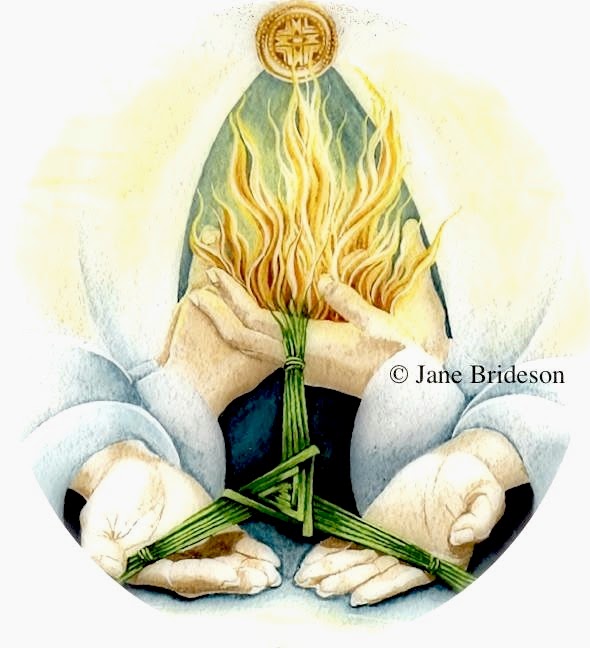 Tonight the goddess is believed to walk the land of Ireland.
So I wish you all the blessings of Brighid on your hearths and on your homes.

For more information on Brighid and Kildare please visit HERE
Posted by Jane Brideson at 15:16:00