The White Mare & the Horse Whisperer 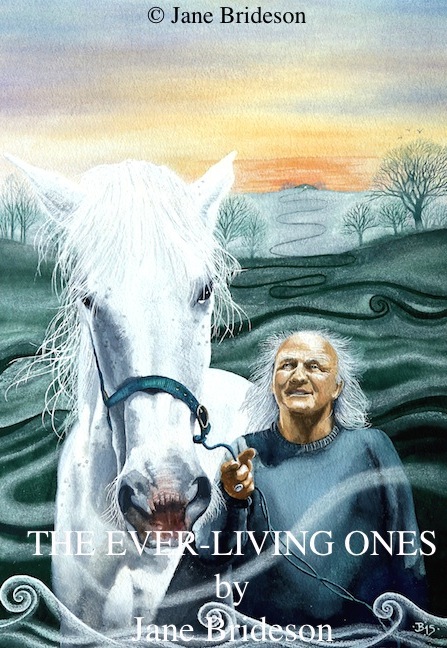 My painting of the White Mare and the Horse Whisperer is finally finished.
It was inspired by the Otherworldly horses of folklore, the Sídhe and stories told about the ability
of a famous horse whisperer in Ireland.

Horses have been important here since 3,000 BCE  and are associated in mythology with several deities: Macha in Ulster, the DAGDHA, DONN and MANANNÁN MAC LÍR,
as well as with the rites of kingship on the HILL OF TARA where the Goddess of Sovereignty
took the form of a white mare.

A strong relationship between horses and water was seen at Lughnasadh when horses were swam
in rivers to protect them from harm during the year and tales of the fearsome each uisce,
the water horse, who was believed to live in lakes and the sea, was well known across the island.

Horses feature in many stories about the naming of places and one such tale tells of a lake in
Skreen, Co. Sligo near the Ox Mountains.
It was here that a local farmer found a horse on the shore which he caught and took home.
Many years passed and the farmer found the horse to be strong, gentle and easy to work.
One day however he struck the placid horse for the first time and the creature changed, rearing
and snorting violently. Before the farmer could dismount the water horse plunged into the lake
taking the man with him.
The farmer's body was never found but his heart finally floated to the surface and gave the
lake its' name, Lough Aghree, Lake of the Heart.

Folklore tells of the belief that horses are sensitive to the presence of ghosts and Otherworldly
beings and will halt if a spirit is close by and refuse to move. If the rider looks between the horses
ears he too will be able to see the sídhe.

Their importance to humans meant that horses had to be protected from the good people,
who would steal them, ride them through the night, then return them the next morning lathered
and exhausted. To counter their intentions a slip of rowan would be tied to the mane or seven hairs knotted into it.
Others believed that horses were able to protect themselves by sneezing to keep the sídhe at bay.

In the west many fine horses were thought to be descendants of Otherworldly stallions.
The supernatural horses from the caves of Kilcroney, on the Burren and the sea horses which
emerged from Galway Bay, were reputed to have mated with local mares and produced a famous
blood line.

There were also tales of the fíorláir, ‘the true mare’, a name given to the seventh consecutive filly
foal born to a dam. This foal was understood to be safe from all evil and that her rider would be safe from all harm.
On the spot where the true mare was born a four-leaved shamrock would grow having the power to heal and protect anyone who picked it.
In general horses were considered to have luck attached to them with horse shoes being hung on
or above doors and halters kept in the home, even if the horse had been sold.

Horse-Whispering was the secret method which certain people used to tame unmanageable horses
and it was believed to be a gift passed down through generations of travelling families from father
to son. There are several opinions as to the actual method used in horse whispering or charming,
some say it is the application of a certain balm to the horse's muzzle, whilst others maintain the
secret lies in a calming spell whispered into the ear.

One of the most famous whisperers of the eighteenth century was Daniel Sullivan from Mallow,
Co. Cork who was secretive about his methods, claiming that he could not explain his power.
His success with race horses was well known throughout the country and in his native Cork it was
said that if he spoke to a horse it would lie on its back with all four legs in the air and remain so calm that a glass full of drink could be balanced on each hoof.
Today horse whisperers are found across the world but none have been able to emulate Sullivan's feat!

See video below in which white horses and water horses still symbolise power, the Otherworld and Ireland :

For information on Fairy Horses please visit Living Liminally
The story about Lough Gur and the white horse can be found at Voices from the Dawn
Posted by Jane Brideson at 17:51:00