The traditional Irish storyteller is the Seanchaí, which originally meant a 'bearer of old lore'.
These storytellers were part of the great oral tradition of Ireland who remembered and passed
on a large number of tales across the generations. Their particular style of speech and gesture,
as well as their role as custodians of folk tradition, are understood to link them back to the
filí, the poets of pre-Christian Ireland.

Some Seanchaithe travelled from one village to another trading their stories for food and shelter
whilst others settled and became the Storytellers of their particular area.
Many of the stories, which are still being told today, focus on special places within the landscape, Otherworldly animals or beliefs about the Sídhe and their customs.

One such story - The Oldest Creature is being told by the Seanchaí in the painting above:

"A certain man, amazed at the coldness of a particular night, wonders if there was ever so cold
a night before.
He sets out to discover the answer to this....

and first meets an otter lying in a deep hole on top of a rock. The otter tells him that he has been there so long that the hole has been worn in the rock by its body, but it has never seen so cold a night as recently. 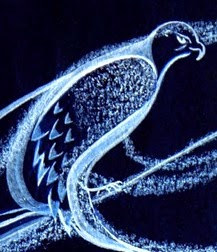 Seabhac Acla - the Hawk of Achill, Co. Mayo, which is perched on an anvil
and has been there for so long that the anvil is almost worn away by the rubbing of its beak after eating. Neither has it seen so cold a night. 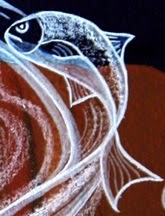 the one-eyed Bradán Easa Rua - the salmon of Assaroe, Co. Donegal.
The salmon tells him that it does indeed remember a colder night an extremely long time ago.

It had frozen so fast that night that when the salmon had jumped out of the water to catch a fly,
the river had turned to ice when it returned.
The salmon had lain on the ice sure it would die until a bird came along and plucked out one of its eyes.
The heat of the blood from the eye melted the ice, and so the salmon had returned to the water. "

One of the best known Seanchaí today is Eddie Lenihan and you can see him introducing his
art of telling a good story below.
You can find Eddie's book "Meeting The Other Crowd" HERE

Please contact me on the email form below if you would like to order
an Art Card of The Storyteller /Seanchaí .